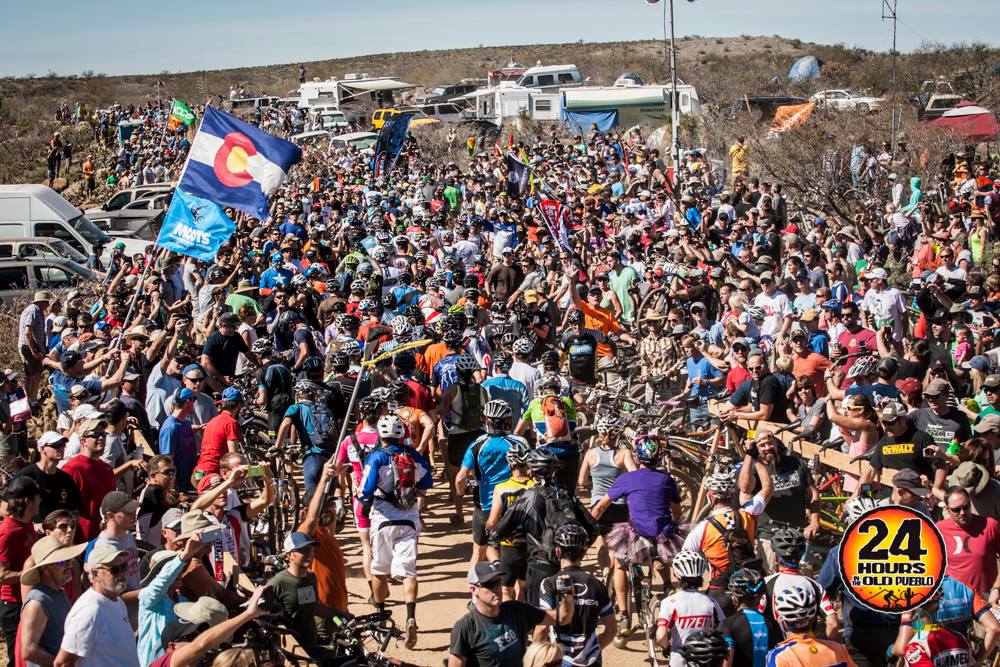 This last weekend brought us 24 Hours in the Old Pueblo down in Tuscon, AZ. We loaded up 2 rigs, 1 trailer, 10 bikes, 3 tents, food, tools, beer, and enough lights to land 747 in the middle of the desert. This year brought something different for many of the 9 riders. For some it was an annual pilgrimage that marks the start of the mountain bike season, for some first timers in was a baptism by fire in 24 hours racing, and for Nic it was to be a solo effort and that most of us will never have the ability, drive, or maybe stupidity to attempt.

We loaded up Wednesday afternoon in preparation for the 15 hour twilight haul to the outskirts of Tuscon. Not only is this a good opportunity for a few laughs, fish stories, and past race experiences, it’s your first of many nights of sleep deprivation. You see by the picture above that “24 Hour Town” as it’s called fills up really quickly with 2500 racers, support staff, vendors, volunteers and more RV’s that a NASCAR race. So it’s pedal to the floor through the night to get there early enough for a prime spot.  1st goal of the weekend achieved: We secured a great tent space on course, right at the top with a prime view. This not only provides constant entertainment, but also is key so solo racers can refuel and rest a bit without having to ride as much as a mile in each direction off course to get to your new home away from home.

The rest of Thursday is usually pretty uneventful. Try and get settled in, a lap or two around the race course to stretch the legs, one last trip into to town for some mexican food, beers, and a free birthday dessert.  (even though it’s not your birthday. Thanks Patt!)

Come Friday everyone’s starting to get a bit excited. Heck, Jeff couldn’t even keep his breakfast down he was so excited! (read hungover).  A full day of charging lights, dialing in equipment, a bit more riding capped off with the Drunkcyclist.com Beer Crit and a “Last Supper” of beef tenderloin, mashed potatoes, grilled asparagus and a couple more beers put everyone in their happy place. A good night’s sleep (only interrupted by Jordan getting lost and arriving at 2am and a random guy crashing his bike into Donald’s tent) had us all ready for the challenge ahead.

Saturday at high Noon brings the shotgun style LeMans style start (see above) with a 1/2 mile mad scramble to find your bike and get out quickly to avoid all the inevitable traffic. Jeff got out well inside the the top 10% to give our team a great chance, while Nic came through solo right on target in an hour ten minutes, then Donald came through about 15 or 20 minutes later with his best effort to screw everything up for his teammates and put them well back in the standings. (Just kidding, Donald!) Record high temps, while a welcome change from the previous week’s sub-zero readings here in CO, took their toll on many racers early in the lap count. Dehydration was a real concern and definitely made more than one racer push their body into an unexpected red zone. Some backed off their efforts til the sun went down, some fell to the effects of Mother Nature, and for some it brought on an unforeseen result. Our own super human Nic Handy was one of those. Nic had cramps develop in his kidneys and move along the entire side of his body making riding impossible. After a stop by the massage table and some serious contemplation, Nic’s race was over after 50 miles. Better to fight again another day than do serious and permanent damage. In true Nic Handy fashion, he still had a smile on his face enjoying the experience as much as he could by playing support crew, mentor, mechanic, and jester for the rest of us. When life hands you lemons…

As the sun came up Sunday team #1 found themselves sitting just out side the top 20 (which was the goal) with about 6 hours of racing remaining. Knowing we’d get faster in the daylight and that we had our two fastest guys Jeff and Steve coming up, we felt good about our chances. 20 minutes into Jordan’s 4th lap that all changed when he broke a chain. Broken chain on a singlespeed means replacement with a field repair all but impossible. By the time Jordan got sag support back to start/finish, handed off the baton and made his way back to the tent, we had lost almost an hour and 15 minutes. Goals be damned, now it’s time to just ride. In the end we finished somewhere outside the top 30 with only 18 laps on the 16+ mile loop.

But, we made it home safe after a sleep deprived drive and managed to keep Steve’s truck under 5000 rpm (except once, Ha! Steve, you can laugh now). A bit tired, full of a few cactus holes, and smelling of campfire. Well worth it since you can’t just fabricate experiences, memories and friends like this. Kudos to all of you that participated. Can’t wait til next year!