We want to thank you!

Unfortunately, our time has come, and our doors will be closing in March 2023.
Come by to share memories, laughs, and get in on some great deals. 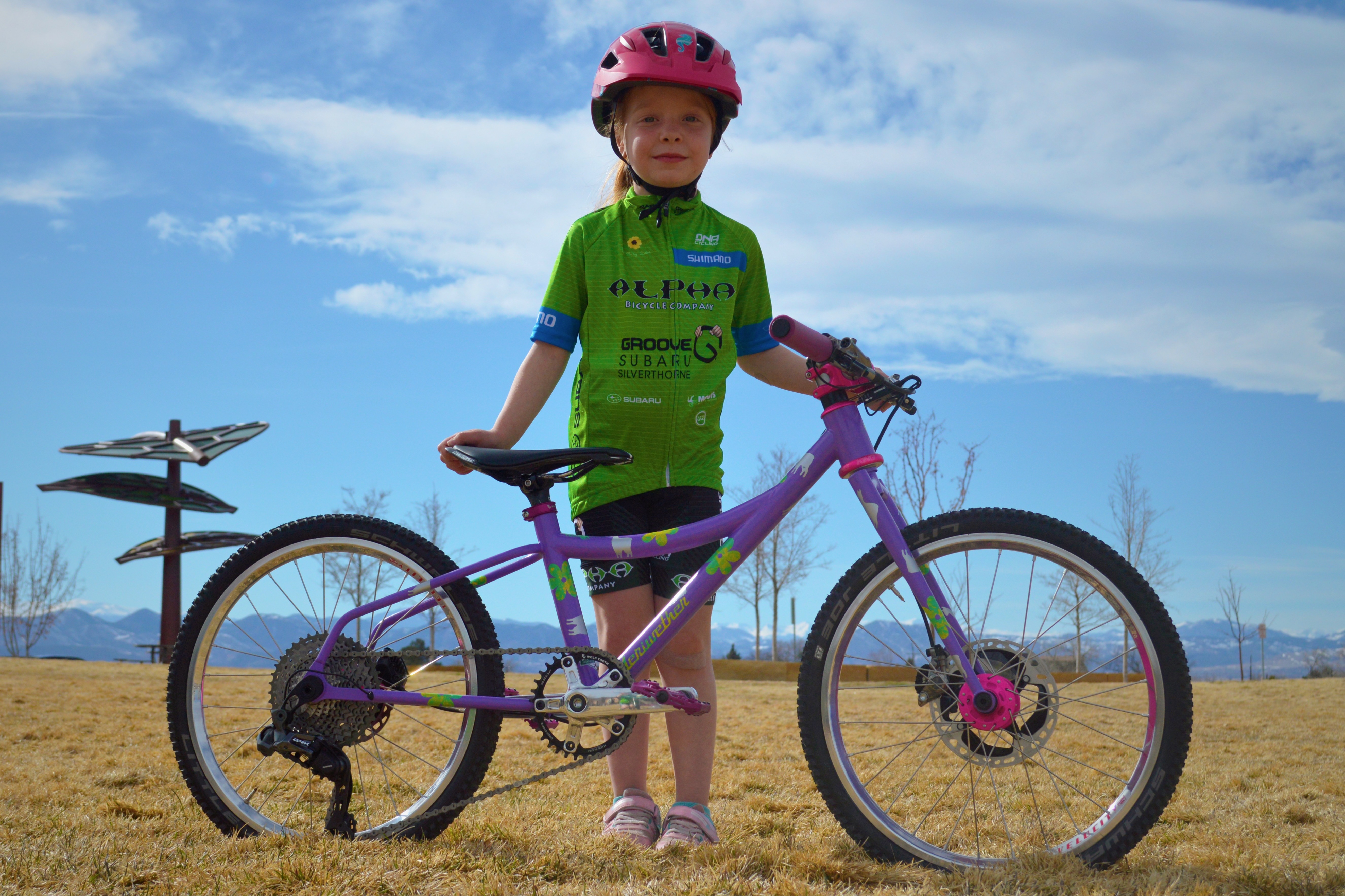 This project started almost as one of necessity. Bicycle shortages and delays are a matter of fact that don’t care if your daddy owns a bike shop. With the shop’s allocation of kids bikes from our manufacturers barely able to cover a quarter of the demand, I knew I was going to have to get creative. Combine that with the fact that my now 6-year-old twins are still pretty small for their age. They just can’t fit the majority of 20” wheeled bikes that are on the market. At the same time, their small stature and current single speed bikes didn’t stop them from regularly riding 4 or 5 miles a day, often while having to dismount and push up the bigger hills.

Like most ideas I have, the longer I have to ponder the more the ideas snowball. Also like many ideas I have, this snowball required that I call in some very talented and gracious people to help make this dream into a reality.

Back in May 2020, I contacted my friend Chris McGovern who was as keen as I was on creating some one-off custom kids’ bikes. We collaborated on a design that was simultaneously functional while being a bit over the top. We were confident that we had the design dialed and that geometry was going to require a custom fork. Chris told me that the guy to create  such a piece was his buddy Whit Johnson at Meriwether Cycles. Over the years I had seen a bit of Whit’s craftsmanship and I was almost giddy that my girls could have a custom fork for their bikes made by him. Chris’s creativity and expertise in fabricating with multiple materials lead us to design features that were probably excessive, even by this project’s standards. Then the supply chain interruptions sank their teeth in a bit deeper. At the end of 2020, Chris just couldn’t source the materials need to bring the vision to fruition. At the same time, we both kept chatting with Whit. He had stock of the materials we needed and said he could sneak in the time in his schedule to make it happen. By their 6th birthday, we were back on track. But the girls had grown. Whit took the geometry that Chris created and made the necessary tweaks to make the fit safe but still help us extend their time on the bikes as long as possible. In addition, he re-ran the numbers and with some creative tube shaping we are able to optimize the geometry for both 20- and 24-inch wheels. With that we should be able to lengthen the stem up to 90mm, maybe add a riser bar and rebuild the wheels on 24” rims so the twins should be able to ride the bikes for the next 4 years or so. The underlying theme to this undertaking is creativity. I wanted the girl’s bikes to each be an expression of their individuality. I also wanted them to be able to help with this process.  I was more than familiar with the artistry that my buddy Chris Namba had created with Squid Bikes and being the US distributor for Spray.bike. I sent him a message asking if he’d be willing to create some custom cut vinyl masking for us. Within 3 minutes, I had a “Oh yeah! No problem!” reply. I asked the girls what they wanted to paint on their new bikes. Hannah replied, “I want llamas and flowers.” Abbey chimed in “Bunnies and hearts!” We then sat down and picked out a variety of hues from Spray.bike. When I sent the request over to Namba, his reply was “ha” followed by an emoji and I knew were heading in the right direction. For anyone thinking about giving their bike a facelift, I can’t give any higher recommendation for Spray.bike. A few observations of our process. First, IT’S EASY! So easy a 6-year-old can do it. Second, the steps are: Ask questions, research, plan, prep, prep some more, paint, plan a bit, ask more questions, paint, patience, paint, patience. Third, when painting with kids you can never have too many cans of sparkles. The Meriwether logo was a last-minute addition that was decided on somewhere between “plan a bit” and “ask more questions” then made a reality by AJ at Victory Circle Graphix.

With such an amazing frame canvas, the parts selection had to be equally impressive and functional. In the shop we often hear of frustrations from kids not being able to twist or push mechanical shifters. I’ve long thought this was a great application for Shimano Di2. Once our elite cyclocross team extended their partnership with Shimano for the next 2 years, they had some used parts to get rid of. In addition, they had some Chris King hubs from a previous wheel sponsorship and with an upcoming change in frame sponsors, the team had some used headsets that weren’t going to be compatible with the new frames. At the same time, development teams are always in need of cash. So, this was a great opportunity for us to outfit the bikes with some amazing parts and also make a contribution to the future of the sport. Abbey and Hannah also think it cool that they have parts handed down from some amazing athletes. “I have Ross’s seat!”, “I love the color of Turner’s turn-y thing” (headset) and we had a talk about how their matte punch hubs were part of our program’s most successful season and were likely raced to National Championships, countless UCI Elite podiums or to a Top 10 at World Championships in Denmark. The scratches and signs of wear tell an extraordinary story. With the majority of the parts sourced from the Alpha Bicycle Co. – Groove Silverthorne CX Team, I dug deep into my personal parts bin. I found a set of previous generation XTR brakes. We split the calipers between the forks on each bike and then my friend Brad Allen from Shimano helped me out with another set of XTR levers. I had a Moots Ti handlebar once installed on my 10-year-old MootoX and Jeremiah from Moots found another “too narrow to sell” Ti bar that were both perfect to cut down to the 570mm width. I did splurge on a Thomson stem for Abbey’s bike to match the cutdown post from my parts bin and the pink Industry Nine stem for Hannah’s bike to match the matte punch King headset from Lauren Zoerner’s Moots PsychloX RSL. I then rounded out the builds with a couple sets of Promax BMX cranks that were stripped, sanded and polished to a mirror shine, attached some SDG Slater Jr. pedals, and a bunch of US Manufactured parts including polished Velocity A23’s, K-Edge junction box holders and Wolf Tooth chainrings, seat clamps and Razor grips. The result is a couple of exquisitely crafted, resourceful and absolutely stunning bikes that my girls unquestionably love and are so incredibly proud of. I can not thank everyone that contributed enough. The memories of sharing this whole process with them and the first day’s 10 miles of smiles are something that I’ll carry with me forever. 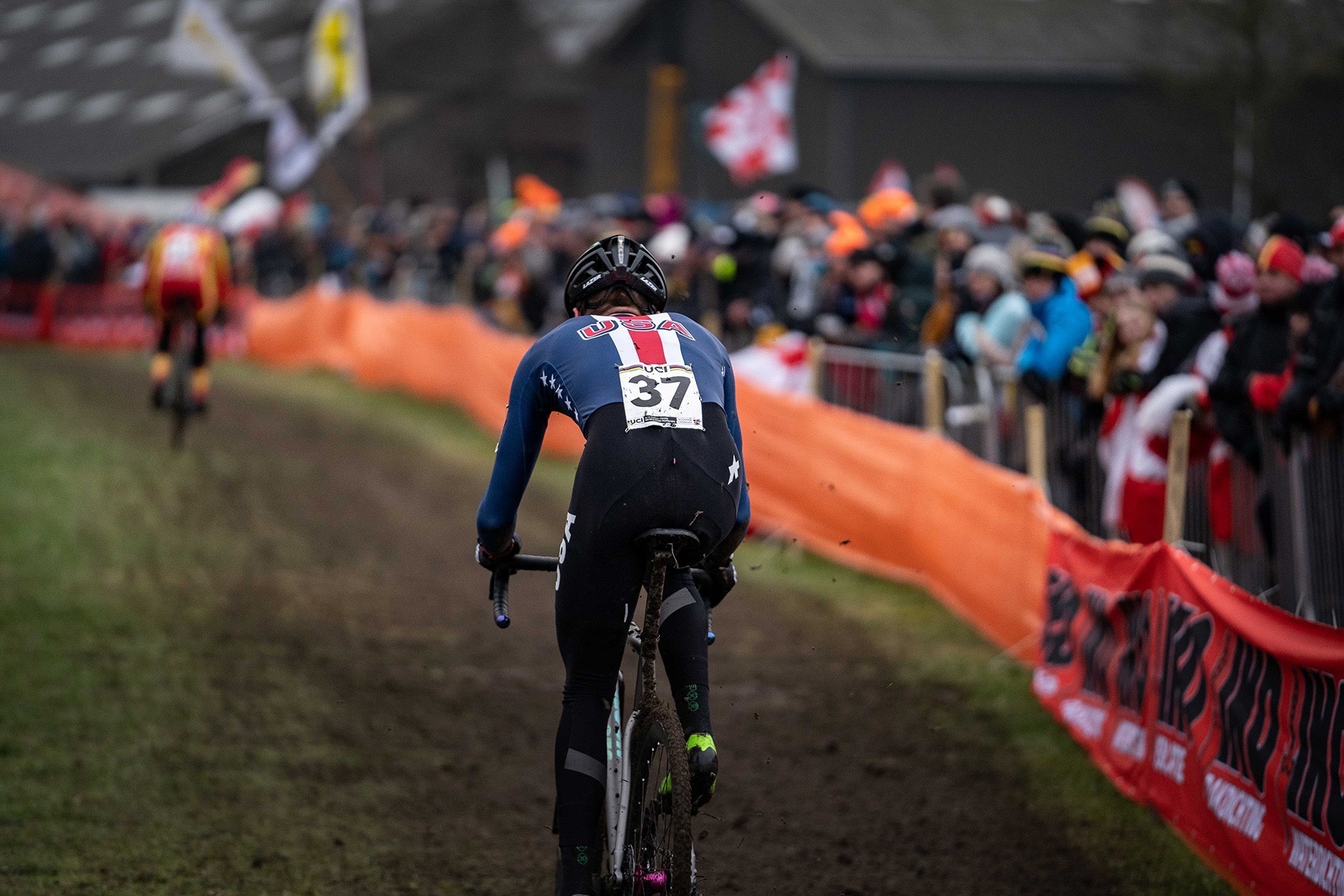 Last Thursday evening we received a call from Nic while he was on his Tour Divide ride. It seems Nic met and rode with a gentlemen from Koksijde, Belgium named Stefan. Stefan had run into a bit of bad luck and suffered a broken frame somewhere on the other side of the Wyoming border. They managed to limp it along  with some make shift trail repairs and get him to Steamboat where he found a hardware store to put a bolt in it to at minimum keep the bike rideable. Meanwhile, we had clicked a few “magic buttons” and KAPOW! a brand new Salsa El Mariachi frame was delivered overnight, on a Saturday!

Now, the fun part. You see Stefan’s English isn’t all that great (either is our Flemish) and he doesn’t have a reliable phone. But with the kindness of a couple of strangers he was able to make a call or two to us, the rest was done via Facebook messenger when he could get a WiFi connection.

We already had planned on  getting a ride in on Sunday with Nic  (who happened to be in Breckenridge). At this point Nic and him had separated along the route and we were tracking Stefan’s progress via his Spot tracker. While we were hoping that he could get to Frisco or Breckenridge, the stars didn’t align that way and we met him in Kremmling. Ah, what’s another hour drive each way among friends.

So, the picnic table outside the Kremmling Mercantile became a home away from home for a few hours and we got to work. A frame swap, new King headset, new Shimano bottom bracket, and a new Revelate Ranger frame bag to fit.

After an hour and a half or so, Stefan was all ready packed up, super stoked, and ready to go. Yeah, it was a long day for all of us. But, the important thing was that he was happy and able to continue his dream of completing the Tour Divide. Bonus: We made a good friend in the process! 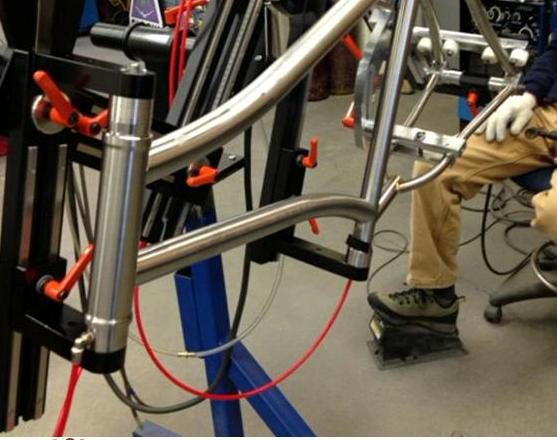 We are excited to announce a joint Alpha/Moots Project Bike for the upcoming North American Handmade Bicycle Show that is taking place right here in Denver on Feb 22-24th.
“Farrhoots” as it has come to be known, was the brainchild of our own Nic Handy and with a input from all of us in the shop as well as a huge effort from the crew at Moots, we promise to deliver a showstopper to be unveiled at NAHBS.

After NAHBS, Nic will pilot and guide the Farrhoots on some amazing adventures, all of which will be updated on the Farrhoots Facebook Page.

Keep checking in for more happenings regarding Alpha and NAHBS!